New to airsoft? Find out everything you need to know.
Forum rules
Post Reply
1 post • Page 1 of 1

GUIDE: V2, V3 What Does that Mean?
by Moondog

You may see the term "Version 2", "Version 3" or simply "V2" or "V3" gearbox used to describe an AEG. Which should not be confused with the term Gen 1, Gen 2, Gen 3, etc. which often refers to improvements in the overall make of an AEG's externals and parts (though sometimes is mistakenly mislabeled by some uninformed retailers.)

Simply put, the Version of a gearbox refers to the physical of design of the gearbox shell and its internals. Tokyo Marui invented the AEG and almost all AEG's copy their designs. In 1991 they invented the first AEG, the French FAMAS which had what we now call a: Version 1 gearbox.

When they developed their next AEG's the M16/M4 and the MP5, they improved on the V1 and created...you guessed it, the V2 gearbox.

Two years later, they further refined the V2 gearbox by physically mating the motor to the gearbox (while retaining most of the same internals) and crated the V3 gearbox for their new AK47 AEG. 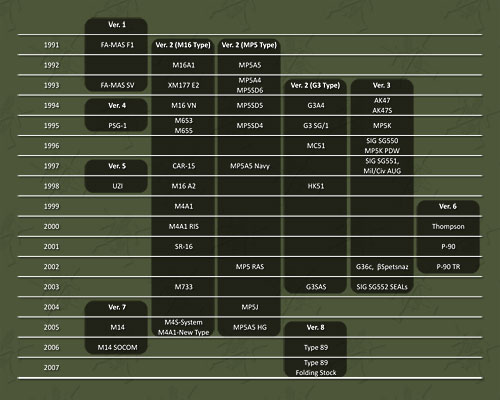 And other AEG manufactures have developed their own unique gearbox types (such as STAR's M249, ICS's split V2, Systema's PTW). No gearbox version is better than another, really. Some gearboxes are more tricky to work and some designs are more rugged than others (the design of the V3 shell is inherently stronger than a V2 shell of the same make.)

Higher/Later versions have improvements but more often than not, they are simply designs that had to be developed to physically fit into new AEG bodies (ie. P90).
Goggles fogging? Get Moondog D-Fog :: See the RULES forum :: Please complete your new account activation. :: Read the guide on face photo avatars
Top
Post Reply
1 post • Page 1 of 1