References to help create an accurate impression of soldiers, rebels and characters

The Abu Sayyaf Group (ASG) are one of the most wanted muslim terrorist groups. The Abu Sayyef gained infamy for its audacious kidnappings, beheadings and bombings of tourists, Christian missionaries, journalists, NGO's, soldiers and local government workers. The U.S. Department of State has classified the group as a terrorist entity with claimed alliances to Al Qaeda.


CLOTHING
Like all insurgents, Philippine muslim fighters wear primarily civilian clothing. This allows them to hide their tactical gear and more easily 'blend in' with the native population to spy, sneak-attack and to escape the military forces and law enforcement.

WEAPONS
Unlike most of the world's insurgents, Philippine guerilla's weapons aren't AK's and RPG's but M16's. Abu's weapons of choice are captured or black-market Philippine Army weapons, to take advantage of battlefield pickup. They are well equipped with M16A1's, M16A2's, XM733's, M14's and M243 SAW's. AGU forces are better armed than most guerilla groups due to the large ransoms they have procured through kidnappings. 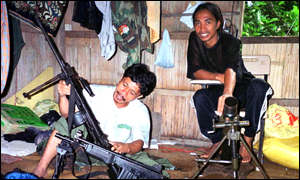